The analyst said its ‘dynamic loadfactor’ – which measures both the volume and weight perspectives of cargo flown and capacity available – rose to 68 per cent in the last week of the month, higher than any pre-covid peak season level since CLIVE began sharing data in May 2018.

CLIVE’s data looks at air cargo market performance compared to both pre-covid 2019 levels and 2020. Data for September 2021 shows chargeable weight of 1 per cent vs 2019, on a par with recent months, “slowly tapering the gap” to September 2020 volumes to 14 per cent following the 23 per cent and 19 per cent levels reported in July and August 2021.

Capacity remained constrained and was down 13 per cent versus the pre-covid level seen in September 2019, while in August it was down 16 per cent versus 2019. “This more reflects the reduction in capacity in 2019 because of the ending of the summer season than an increase in capacity in 2021,” CLIVE said. “Compared to August 2021, global air cargo capacity was more-or-less flat on a like-for-like basis month-over-month.”

The dynamic loadfactor for September overall remained at 66 per cent – but saw a strong upward trend towards the end of the month, CLIVE noted. This growing demand was reflected in continued higher pricing levels, with the average rate in September 2021 following a similar trend to the previous month at more than double the average rates (113 per cent pts) in 2019. Versus 2020, following the 15 per cent pts rise in rates in August, September saw a 26 per cent pts increase as demand vs. supply further improved the ‘sellers’ market’, highlighting the strain on the air cargo supply chain.

“This September data shows just the early stages of the typical Q4 surge, but many signals and commentaries seem to suggest that this will not be a ‘typical’ peak season,” said CLIVE’s managing director Niall van de Wouw. “The recent week-over-week increase in load factor is a significant jump by any standards and shows the pressure on the air cargo supply chain is clearly further heating up. If airlines are micromanaging their capacity right now, they can benefit from it quite substantially.

“Currently, air cargo capacity is still largely controlled by cargo departments of airlines, and I see no reason why this will change in the immediate term. We might, however, not be too far away from this starting to change as certain lanes traditionally dominated by passenger flights begin to open up again for passenger travel, like the transatlantic. This is obviously extremely important to the long-term health and survival of passenger airlines, but it will also be a bittersweet moment after the heroics of the cargo industry. The role of air cargo within the airline boardroom will likely start to recede and impact the demand vs. supply ratio once again.” 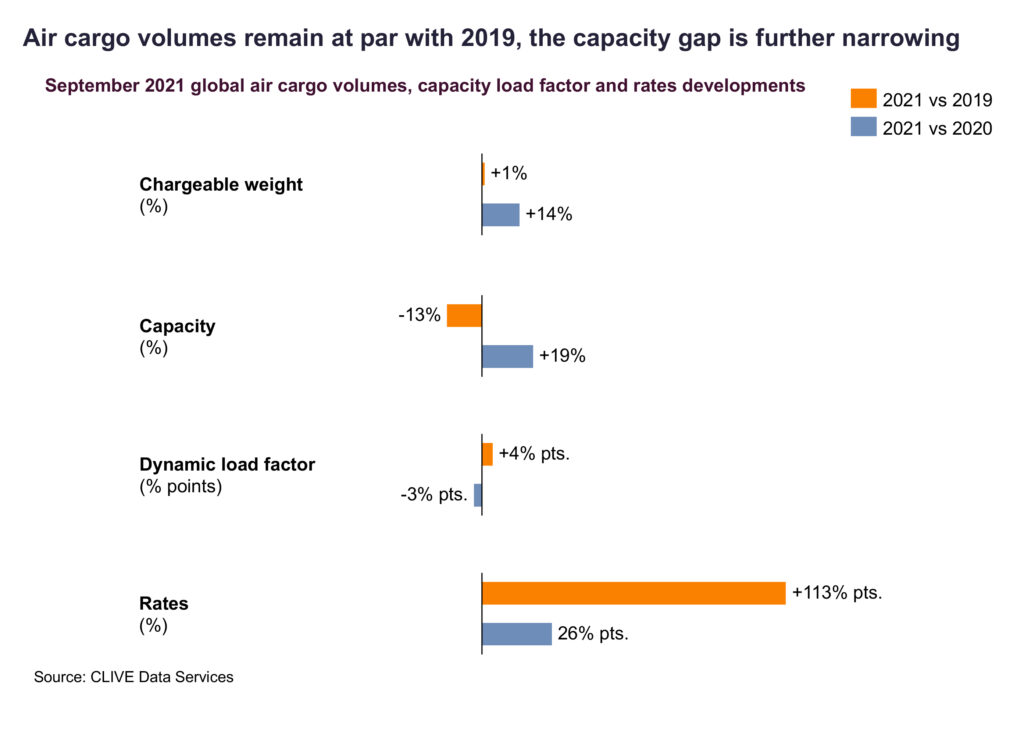