Worldwide Flight Services (WFS) has implemented a series of initiatives and investments to significantly reduce emissions at its seven airport stations across Spain.

The company said its cargo and ground handling operations in the country were helping to spearhead its ‘Our Sustainable Flight Path’ programme.

WFS’ GSE fleet in Spain is now 89 per cent electric for all its cargo handling operations as well as 30 per cent of the company’s ramp handling equipment. This includes electric towing tractors, passenger stairs and belt loaders, aircraft pushback tugs, and other heavy-duty vehicles.

WFS Spain’s ‘Going Green Team’ are also continuing to test new green GSE and collaborating with start-up companies to evaluate the introduction of new types of electrically powered equipment, equipment engine conversions to hydrogen, and other electric devices, such as small cars and last mile vehicles. Trials of solar-powered aircraft steps and electric ground power units have also been conducted.

Although fossil fuel powered vehicles cannot be eliminated in the short-term, WFS said it was partnering with Spanish firm O3-Protégelo to use its patented technology to reduce fuel consumption and emissions whilst longer term solutions are evaluated. 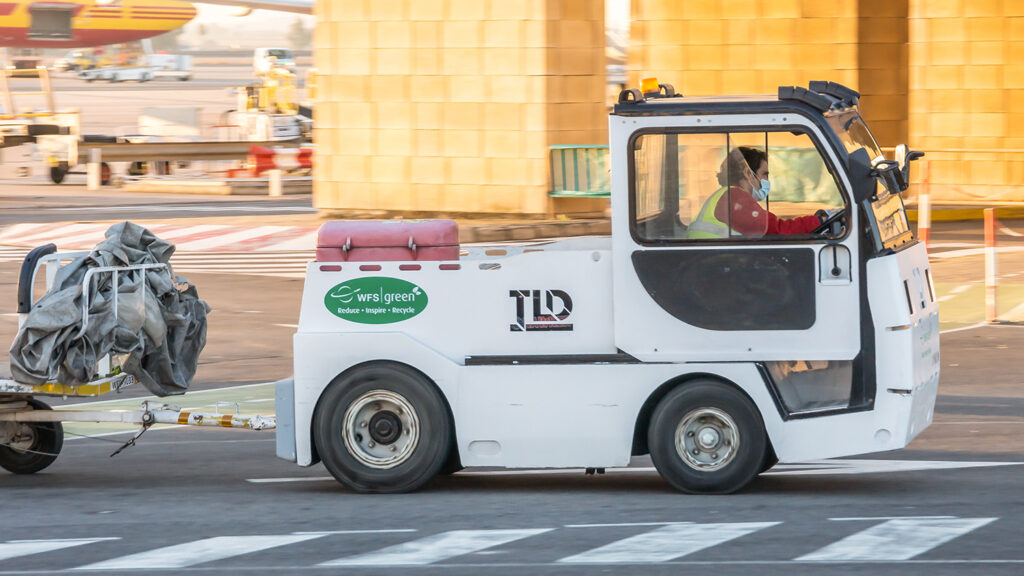 The company’s airport stations in Barcelona, Madrid, Asturias, Santiago de Compostela, Sevilla, Valencia, and Vitoria are also the latest operations across WFS’ global network to be powered by 100 per cent renewable energy, supported by energy solutions designed into new-build facilities as well as the installation of solar panels on the roofs of WFS’ existing handling centres.

WFS has also signed a contract with green energy supplier Plenitude, which has achieved 100 per cent renewable energy status for all cargo stations in Spain, while its ground handling operations have also reached 100 per cent.

Another key initiative has been the optimisation of the sustainable performance of equipment and vehicles. To ensure they are used as efficiently as possible, new @XOPS telematic geolocation systems have been installed to track and monitor usage. WFS is also participating in a specific initiative to pool some handling vehicles at Spanish airports between different ramp operators to eliminate equipment redundancy in 2023.

In a further initiative, WFS vehicle drivers at Madrid and Sevilla airports have completed an eco-driver training course provided by specialists from the Royal Automobile Club of Catalonia (RACC) focused on lowering fuel consumption and carbon emissions in their daily drives around the airport apron areas. Performance measurement since the training has already demonstrated fuel savings of 18 per cent, WFS said.

WFS is also investing in the implementation of LED lighting at its stations in Spain and this switch has already been completed in its warehouse facilities in Madrid, Barcelona, and Valencia. Other initiatives include the use of recycled plastics to cover ULDs – which now represent over 70 per cent of WFS’ total plastics usage in Madrid and Barcelona. New compacting machinery has been installed in Madrid to increase plastic waste segregation and recycling, and new service providers have been appointed to collect and recycle waste.

“When it comes to sustainability, actions speak louder than words,” said WFS Spain’s managing director Humberto Castro. “WFS has set out a very clear sustainability strategy for its global operations and, in Spain, we are already at an advanced stage of delivering many of these targets through our strong green focus, our ability to invest in the best solutions, and the support of our teams across all our Spanish operations, who understand why this is so important and what they can do to contribute.

“We are continuing to move forward in all our focus areas and learning from the sustainability experiences of other WFS stations around the world. Our goal is to not only achieve our decarbonisation targets at our existing operations in Spain, but to have the opportunity to leverage the value of our sustainability programme at more airports across the country.”