Brazilian aircraft manufacturer Embraer is to focus on developing two new concepts for hybrid electric and hydrogen electric aircraft, as part of its plan to achieve net-zero emissions by 2050.

The aircraft concepts are part of Embraer’s Energia sustainability initiative launched last year based on new propulsion technology for smaller aircraft. The airframer has been studying four advanced aircraft concepts that used renewable energy, evaluating them in terms of architectures and propulsion systems.

Among the concepts Embraer is to focus on initially is the Energia Hybrid E19-HE and E30-HE, 19-seat and 30-seat aircraft variants which feature parallel hybrid-electric propulsion offering up to 90% CO2 emissions reduction when using sustainable aviation fuel and by 30% with jet-A1. The rear-mounted engines also boast a 60% lower external noise footprint.

“As new propulsion technologies will be first applied on smaller aircraft, Embraer is in a unique position,” said Luis Carlos Affonso, senior vice president of engineering, technology and corporate strategy at Embraer. “The 19- and 30-seaters are sensible starting points for focused studies since they are likely to present earlier technical and economical readiness. While the challenges of net-zero are significant, in less than 25 years our commercial aircraft have already reduced fuel burn and CO2 emissions by almost 50% on a seat/mile basis, using only conventional fuels and propulsion—I’m convinced net-zero is a goal we can reach.”

“I believe we have set bold but realistic goals for these concepts to come to market,” said Arjan Meijer, Embraer chief executive.

Embraer said it will work initially on the 19-seater variant with a 30-seater to follow. Plans call for this hybrid-electric option to reach technology readiness in the early 2030s and the hydrogen fuel cell-powered application by 2035.

Embraer vice president of engineering Luis Carlos Affonso explained that, although direct hydrogen and fully electric propulsion systems have their place, hybrid-electric and hydrogen fuel cells show the most promise for what he called the mid-capacity Energia family. “We have not given up on those other technologies; for example, in our Eve eVTOL we are employing fully electric because it’s low capacity and short range.”

“On the other hand, if you go to a bigger airplane, let’s say 100 seats up, then the big gas turbines, they are efficient. Then you can have direct hydrogen burn. In the middle, where the Energia family is, in both capacity and range, then small gas turbines are not very efficient and fully electric is too heavy.” 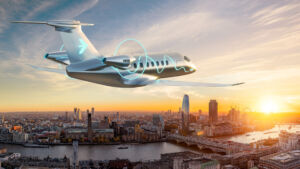