During this week’s MRO Americas event in Dallas, Safran Nacelles signed a six-year contract renewal with Hawaiian Airlines to service the thrust reversers on the carrier’s 24 Airbus A330ceo aircraft.

“Since 2013, Safran Nacelles has been trusted partner that shares our commitment to safety and reliability. We expect Safran Nacelles to continue to provide exceptional support for our A330 fleet,” said Jim Landers, Senior Vice President, Technical Operations, Hawaiian Airlines. 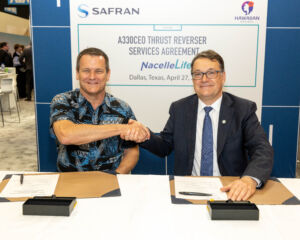